A Parable On Lights and Shining—by Mark R Klopfenstein

“Let your light shine before men in such a way that they may see your good works, and
glorify your Father who is in heaven….Jesus

And a decree went out from the king proclaiming, “Let your light shine in the darkness because
the darkness is great and many are lost there.”

The first man heard the decree and thought, “I must know more about light before I can shine.”
Therefore, he began to study light. He became an expert on light and wavelengths. He learned
all there was to know about lumens and foot-candles, luminaries and light producing
instruments. He studied theories concerning color, energy, and heat all in relation to light, of
course. He taught about light in the universities and wrote many books about light to help
others to be informed about the light. He even began to study the darkness. “You can’t know too
much about these things.” He would say. However, he never actually turned on his light and
he never went anywhere near the darkness.

A second man was a handy type of person and he reasoned, “If the darkness is great then I shall
need a great light to overcome the darkness.” Therefore, he spent a great deal of time designing
and building a magnificent light. It was more powerful that any than any that had been built
before. He took his great light, went to the edge of the darkness, and turned it on. Standing
there shining his light from the edge of the darkness he could see many people exposed by the
light. They were wretched, sick, and stumbling about. He called out to them, “Come to the
light. Leave the darkness behind. Come to the light.” Nevertheless, the people turned away
from the light. This was not because they did not find it beautiful and wonderful but because it
was too bright. When they attempted to walk toward the great light, they were blinded and
stumbled about as though they were still in darkness. Those who tried to answer the man’s call
and reach the light fell, tripped, and were so bruised and broken that they never made it to the
light.

A third man heard the call to shine in the darkness and thought, “My light is really nothing.
It is small and insignificant. I really do not even know how it works. It’s just what I have.” Yet
he took his small light and went to the darkness. His light was still very small and not to
bright. Yet he actually entered into the darkness. Moreover, the deeper he went the brighter
h is light seemed to glow. (He did not understand that in the depths of the darkness a single
candle seems to shine like the sun.) In the end, it was not the intensity of his light that drew
the people to him but its warmth. You see that the darkness is also very cold. Those who were
drawn to the light found comfort there and they followed the man out and into The Light.
Because they went slowly and carefully, so as not to lose anyone, others saw the light joined
them along the way. 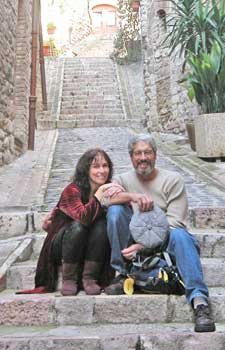